The chemical produced by Fungi can kill cancer cells

According to a study by Massachusetts Institute of Technology and the University of Illinois a chemical that fungi create to defend their territory can kill cancer cells in human beings.

According to Movassaghi itâs been for a while that the researchers know that the compound found in fungi known as 11, 11â-dideoxyverticillin can destroy cancer cells but this chemical in nature happened in such small dosage that it was impossible to perform any tests. But now for the first time ever â11, 11â-dideoxyverticillinâ can be tested since the researchers were able to successfully synthesize this chemical in lab. 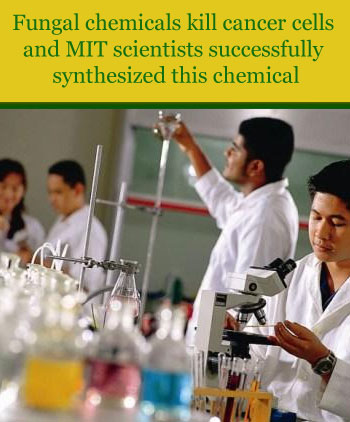 Movassaghi and his colleagues at MIT and University of Illinois in an article published in Journal Chemical Science explain that they tested 60 compounds for their effectiveness to kill cancer cells in humans.

According to Movassaghi, many of compounds known as epipolythiodiketopiperazine (ETP) alkaloids are produced by fungi in nature to fight off other organisms. Besides synthesizing EPT, the MIT researchers have synthesized similar compounds that can fight effectively against cancer. For this recent study the researchers have created even more new compounds by adding and removing certain chemicals from different locations.

The 60 compounds were tested against cervical and lymphoma cancer and then out of 60 compounds, the best 25 were chosen for additional tests against kidney, lung and breast cancer. Since all the 60 chemical compounds were synthesized by adding and removing certain chemicals and changing their locations, the researchers were able to identify chemical properties of the compounds that were the most effective against cancer. For example they found out that the compounds with ETP molecules were more effective against cancer cells when they joined together than being isolated. They also discovered that the compounds that had two sulfur atoms were more effective than those with fewer ones.

They found out that these compounds were 1,000 times more effective to kill cancer cells than the healthy ones. Most importantly, the researchers could effectively indentify the portions of the fungal molecules that can be changed without undermining the cancer fighting properties of fungal. So the researchers can replace these neutral portions of fungi with molecules or antibodies designed to deliver ETP into cancer cells. This will help to turn natural ETPs into effective drugs that have cancer fighting properties. Â

One of the most highly researched medicinal mushrooms is the Turkey Tail mushrooms found in the northern forests Europe, USA, China, Canada, and Japan. Turkey Tail mushroom has had a long history of medicinal use in Japan and China, usually consumed by drinking the tea boiled with these mushrooms for about 25 minutes. Turkey Tail mushrooms are most popularly known as being the natural source of the anti-cancer polysaccharide PSK (polysaccharide K) which is a high molecular weight carbohydrate found in the mycelium of Turkey Tails and the fungi and can facilitate production of cytotoxic alkaloid isolated from a marine Penicillium in order to create dideoxyverticillin. If scientists manage to produce this at a high stable concentration and in large quantities, this would be a great new weapon against cancer cells. Of course, more research and testing is needed. But, still, this is an amazing breakthrough.

I donât know how both FDA and big pharma are going to react to this, but Iâm sure big pharma and chemical companies will sooner or later find some way to stop the public to have access to this information. Â