Our Poisoned Planet - Living in a Chemically Dependent World

Almost 45% of Americans are diagnosed with cancer at some point in their lifetimes while 25% die from cancer. According to a study published by the Harvard University School of Public Health, unhealthy lifestyle elements including poor nutritional diet, lack of physical activity, carcinogens in the environment, smoking and obesity are responsible for 65% of cancer deaths. 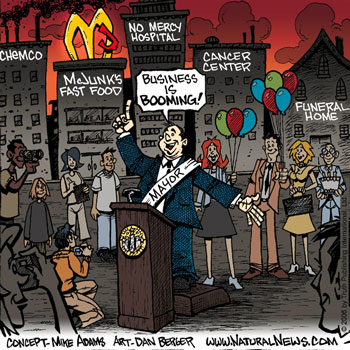 Despite billions of dollars spent on expensive cancer treatments, the recent studies suggest that chemotherapy induces healthy cells to produce a harmful protein that helps to promote the growth of cancer cells. At the same time chemotherapy damages the DNA of healthy cells and severely destroys the immune system so the body cannot defend itself and is unable to repair the damage.

So, the question is that why billions of dollars are wasted on futile care when for example chemotherapy doesnât even work 97% of times? Or why doctors recommend drugs with adverse side effects that undermines the effectiveness of the drug and weakens the immune system at the same time?

Instead of spending money on stronger drugs and antibiotics that don't work, we need to invest money on a healthy and nutritional diet. Keep in mind that diet is your biggest ally at avoiding chronic diseases like cancer.

Your healthy lifestyle is the biggest ally against diseases

Busy lifestyle and lack of time makes it harder for people to grow their own organic food, but more and more people are recognizing the importance of a healthy lifestyle. Unfortunately the truth is that the American diet is designed and engineered for a shelf in the warehouse not the American people. Sugar is the cocaine of foods and average American consumes 22 tea spoon sugar a day.

The food industry is engineering addiction into sugary foods and toxic additives and preservatives like aspartame and MSG are added to enhance the flavor of processed and junk foods. Consumers should be aware that MSG and free glutamates can be hidden under 50 different names in our food supply.

The truth is that white processed sugar kills more people in the world compared to all the drugs combined but itâs everywhere even in the breakfast cereals of our kids.

Your healthy lifestyle is your biggest ally against most chronic diseases. Amazingly, the junk food industry is aware of that and spends billions of dollars on misinformation to create equivalency between GMO foods, processed foods or pesticide ridden foods and organic foods. Their entire goal is to demolish the wholesomeness of healthy and nutritional foods.

The pesticide empire is willing to go as far as we let them.They have spent millions of dollars fighting against the will of the American public to label GMOs.

Junk food corporations and the financial beneficiaries of the junk food industry are the largest advertisers who use marketing media and manipulative tactics such as patriotism to manipulate masses by believing that Americans should have the right to junk foods.

These âCorporate Child Molestersâ spend billions of dollars on innovative and manipulating marketing tactics to make junk food appealing to our children, hence the reason why one out of three kids born after the year 2000 is obese or diagnosed with type II diabetes.

At the same time the food industry clings on the myths of âRightâ or âFreedomâ that Americans have to junk foods. However, the reality couldn't be any further from the truth.

The FDA who is in charge of regulating your food has helped, funded and even organized armed governmental raids against the producers of raw milk and fresh organic products.

Also, if itâs free will, why the junk food industry doesnât respect the will of 90% of ALL Americans that agree that genetically modified foods should be labeled? But instead they prefer to spend millions of dollars and keep us in dark and uninformed on whether or not our food is genetically modified.

Ironically, all the CEOs of giant companies, members of Congress and even President and ex-Presidents eat only organic food. In fact, White House and Monsantoâs canteen have one thing in common: they both serve ONLY organic food.