Top 10 Poisons that are the legacy of Monsanto

1. Low calorie sweeteners (Nutrasweet) including both Aspartame and Saccharin

In 1985, Monsanto bought Searle Company that was the main producer of artificial sweetener called aspartame used in carbonated beverages. Nutrasweet products are low calorie sweeteners that have been linked to cancer, craving for sugar, obesity, diabetes and chronic neurological disorders.Â This is when Monsanto among many other powerful corporations in America donates millions of dollars to research centers and facilities including the American Diabetes Association.

In the late 1920s, Monsanto become the largest producer of polychlorinated biphenyls (PCBs) used as hydraulic fluid, cutting oil and lubricant for electric motors, capacitates and transformers. PCBs were banned in 1970s but the remaining of it still exists along Dead Creek in Sauget where Monsanto had its first PCBs plant. Monsantoâs first PCBs plant was in the state of Illinois that has one of the highest rates of immature death and birth defects. Now PCBs are widely banned and known as one of the most dangerous chemicals related to cancer, immune system disorder, birth defects and even death. Keep in mind that a recent study by University of California in San Francisco shows that Monsantoâs PCBs still remains in the blood of pregnant women. http://www.ucsf.edu/news/2011/01/8371/ucsf-study-identifies-chemicals-pregnant-women 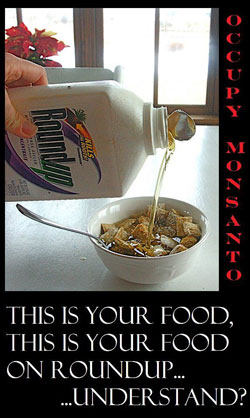 In 1944, Monsanto among 15 other companies started manufacturing DDT as a pesticide for killing weeds. Despite all the claims of Monsanto that DDT was safe, the research in 1970s confirmed that DDT was toxic and due to public pressure DDT were banned in 1972.

Soon after DDTs were banned in 1973 Monsanto developed another toxic pesticide called Roundup (even more toxic than DDT). The active ingredient in Roundup is glyphosate molecule used for killing weeds and roots. Glyphosate has been linked to birth defects, reproduction failure and deformities in animal laboratories. Roundup is now widely used as a common weed killer and is marketed to 115 countries worldwide. After selling Roundup, Monsantoâs sales grew by 20% and from 1980s to 1990s Roundup has made up for 45% of the companyâs income.

Many concerned scientific community and researchers among them Dr. Huber have warned the officials about toxicity of Roundup. In fact, Dr. Huber wrote a letter to Tom Vilsack, the secretary of agriculture and the former governor of Iowa who was awarded by biotech industries as the governor of the year and described his concern that there is a link between Roundup and a mystery organism. He explained how the mystery organism is causing birth defect and infertility in laboratory animals.

In his letter Dr Huber writes âFor the past 40 years, I have been a scientist in the professional and military agencies that evaluate and prepare for natural and manmade biological threats, including germ warfare and disease outbreaks. Based on this experience, I believe the threat we are facing from this pathogen is unique and of a high risk status. In laymanâs terms, it should be treated as an emergency.â

Dr Huber also asked the secretary of agriculture not to approve GMO alfalfa that can contaminate organic and non-GMO crops (since itâs pollinated by insects). However both FDA and Department of Agriculture ignored and didnât respond to any letters of Dr Huber.

Hormones are also related to a wave of chronic diseases including colon cancer, diabetes, heart diseases and obesity. Both European Union and Canada have banned the use of growth hormones in livestock.

During George W bushâs presidency, the French who have zero tolerance for using hormones, pesticides and carcinegens - rejected to buy cows grown in America. Probably most people remember George Bushâs famous quote "... that either you are with us or with the enemy". Since no act of rebellion against the pesticide empire remains unrewarded, the Bush administration retaliated by increasing steel import tariffâs during GATT talks to punish the French government and accused them of being anti-American. 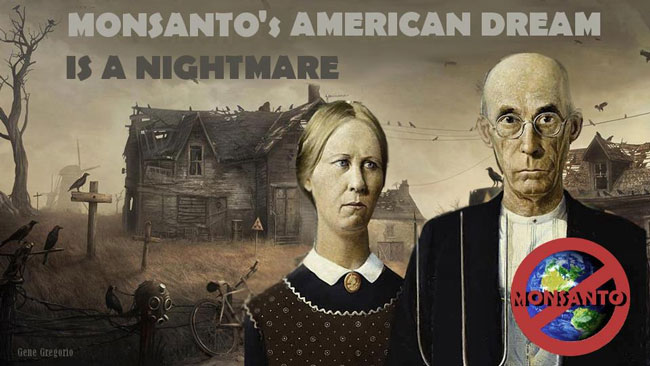 Monsantoâs American dream to genetically modify our seeds and food supply has turned into a nightmare for everyone including US farmers, consumers and the economy.

Although many independent studies of concerned scientists have linked GMOs to obesity, infertility, cancer and even autism, Monsanto has been able to fully dominate and control our seeds and food supply. The devastating results of GMO crops have cause more than 250,000 deaths of Indian farmers in the last decade. Most disturbingly, these farmers commit suicide by drinking Monsantoâs insecticide âRoundupâ that was shipped to them.

GMOs have also caused 99% loss in export of US agricultural products to Europe and according to the report by Washington State University, the use of pesticides have grown by 404 million pounds from the time they were introduced in 1996 through 2011.

GM crops do not grow on their own are just an expression of the willpower and control of the biotech industry. Now Monsanto owns the seeds, owns the best selling herbicide called âRoundupâ and owns our food supply.

Monsanto supporters and its financially beneficiary have also done an excellent job of spreading lies and misinformation to bash and manipulate the truth.

Although the biotech industry claims that GMOs are safe, the American public are waking up and finally standing up for their rights. 30 other states have already required GMO labeling and are fighting for the right of consumers to know if their foods have been genetically modified.

Monsanto and Dow were the main producers of dioxin that was a byproduct of 2,4,5-T herbicide.Â 2,4,5-T herbicide was used as an agriculture herbicide before 1950s. Since 1940s more than 300 million pounds of dioxin laden 2,4,5-T has been sprayed on more than 400 million acres of famers and agricultural property in US. Later on, 2,4,5-T dioxin-containing herbicide was mixed with 2,4-D to create the chemical warfare called âAgent Orangeâ against the Vietnamese.

Both Monsanto and Dow were primary manufactures of Agent Orange, although Monsantoâs formula had higher levels of dioxin than Dow.

72 million liters of dioxin produced by Monsanto were dumped on more than 4.8 million Vietnamese. Agent Orange killed more than 400,000 Vietnamese while half a million children were born with birth defects and up to million people were disabled and suffered from chronic diseases. More than 3 million American troops and their offspring were also the victims of Agent Orange.

Many scientists have regarded dioxin as the most toxic and poisonous small molecule on the planet. But if enough people hadnât protested against dioxin, Monsanto and Dow would be still selling their leftover Agent Orange stocks.

In 1940s, Monsanto focused on oil-based plastics including synthetic polystyrene which is still widely used in food packaging in US. Polystyrene foam is non-biodegradable and an environmental disaster. Monsanto was involved in building several Disney landâs attraction entirely built by non biodegradable plastic. When Disney decided to tear them down they couldnât even break the remaining pieces of the building by chain saws or shovels so they had to squeeze big pieces of these non biodegradable plastic into a truck. 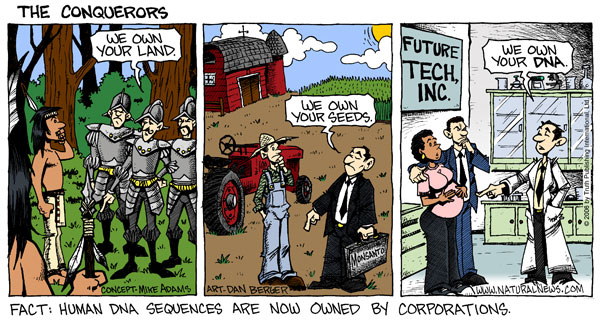 9. Influence and domination of Monsanto over our foods and seed supply

More than 75% of processed foods are genetically modified and more than 90% of all soy and corn grown in US are GMOs. 50% of US farmlands are used to grow GMO corn and soy whereas only 3% of farms are used to grown fruits and vegetables.

Monsanto has been dominating our foods and seeds for too long. One would wonder how a corrupted company like Monsanto with its dark history can be in charge of our foods and seeds. Even Obama, despite his promises to label GMOs appointed Mike Taylor as head of FDA. He also appointed Roger Beachy, the former director at Monsanto as head of USDA, Tom Vilsack and creator of Governors' Biotechnology Partnership as the commissioner of USDA. He promised to label GMO foods, but instead he signed Monsanto Protection Act that will give Monsanto ultimate protection from both the legal system and the government.Â

Also despite all the sanctions against Iran, the US has been selling Iran GMO wheat. This is when the US doesn't even sell Iran commercial airplanes when hundreds of innocent civilians die every year because of plane crushes.

During WW2, Monsanto was involved in Manhattan project and production of the first nuclear bomb that was later on dropped on both Hiroshima and Nagasaki. Although, the history written by the powerful and rich claims that dropping atomic bomb was the ONLY way to end the war with Japan, the documentary by Oliver Stone called âthe untold history of USâ clearly shows that this isnât true at all and America had already won the war.

Oliver Stone in his documentary shows how the war was over and there was no need for the mushroom cloud over Hiroshima and Nagasaki which later on President Harry Truman regarded as âan overwhelming successful experimentâ.

But because we can and have threatened the humanity with our bombs, are our mistakes forgiven and our cruelty justified? But domination doesnât last. Five major empires have collapsed in the lifetime of a person born before WW2, Britain, France, Germany, Japan and the Soviet Union....Â

...Henry Wallace worried that if the US treated the Soviets so badly when US was riding high economically and militarily, how would the Soviets treat the US when and if the situation was reversed. It never happened but this race to the bottom he understood will have no winner. Looking back at the American century one would ask if we have acted wisely and humanely in our relations to the rest of the world? A world which the richest few hundred or a thousand or couple of thousand have more wealth than the poorest three billion?â

Political corruption of Monsanto and its influence

10 Reasons why Monsanto is corrupted from its core

How is Roundup related to birth defects?