In a study published by the Journal of Alzheimer's Disease, researchers have discovered that vitamin D3 and omega 3 fatty acids DHA (docosahexaenoic acid) can fight inflammation and plaque buildup. 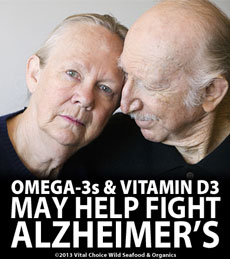 The previous study by the same team showed that vitamin D3 can help to destroy the abnormal protein also known as âamyloid âbetaâ found in the plaque. However, the new study highlights the role of omega 3 and extends the previous findings about vitamin D3 and its effectiveness on fighting Alzheimerâs disease. http://www.seattleorganicrestaurants.com/vegan-whole-food/Alzheimers-disease.php

The leading author of the study Dr. Milan Fiala, from the School of Medicine at UCLA said that "Our new study sheds further light on a possible role for nutritional substances such as vitamin D3 and omega-3 in boosting immunity to help fight Alzheimer's".

The researchers discovered signaling pathways and key genes controlled by omega 3 and vitamin D3 that could help to boost the immune system, lower inflammation and clear the plague

In this study, the researchers took blood samples from people with Alzheimerâs and healthy people who volunteered for the study. Dr Fiala and his colleagues were interested in the immune cells known as macrophages. Macrophages are responsible for finding waste substances like amyloid beta and gobbling them. If the waste products like amyloid beta stay in the blood stream they can clog up the spaces between cells and block the signals from one cell to the other.

The researchers incubated the immune system cells âmacrophagesâ with amyloid beta and added active form of vitamin D3 or the omega 3 fatty acids (DHA). Then they waited to find out the effect this had on inflammation and the ability of macrophages to absorb amyloid beta. 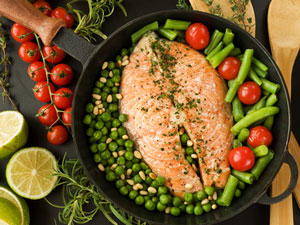 The researchers discovered that omega 3 (DHA) and vitamin D3 could significantly get rid of amyloid beta by immune system cells in patients with Alzheimerâs.

Beside the ability of omega 3 DHA and vitamin D3 to help macrophages absorb amyloid beta, the researchers noticed that there was less cell-death normally triggered by amyloid beta. The research team also noticed that both vitamin D and omega 3 utilized different signaling pathways and receptors to get rids of amyloid beta thatâs casing Alzheimer's.Â  However, vitamin Dâs effectiveness was optimized by the active form of omega 3 that helps the immune cells clear amyloid protein thatâs causing Alzheimer's dementia.

The leading author of the study Dr. Milan Fiala said that "We may find that we need to carefully balance the supplementation with vitamin D3 and omega-3 fatty acids, depending on each patient in order to help promote efficient clearing of amyloid-beta." she also mentioned that "This is a first step in understanding what form and in which patients these nutrition substances might work best."