The giant biotech company, Monsanto was just able to pass a bill through the Congress, Senate and the President. Monsanto Protection Act would allow Monsanto to bypass and exploit the legal system even more than before. The 2013 Agricultural Appropriations Bill (H.R. 5973) would allow Monsanto to even more recklessly plant GM crops without having to worry about US Federal courts or even the government.

The Monsanto Protection Act which was first introduced as legislative rider inside the Senate Continuing Resolution spending bill has now passed both the senate and the US congress and President Obama just signed the bill yesterday. The section 735 of the Agricultural Appropriations Bill uses the deceptive title of Farmer Assurance Provision in order to protect Monsanto from federal courts. 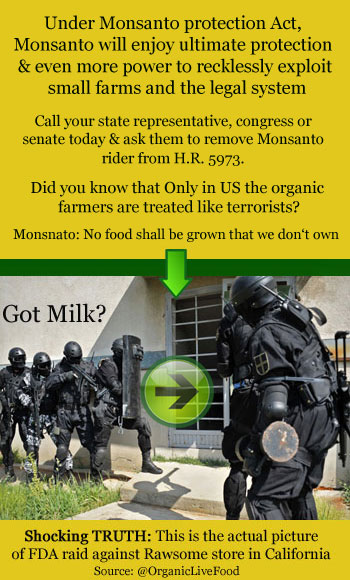 Since the independent research of many concerned scientists have linked GM foods with infertility, cancer, autism and many other health problems, the Monsanto Protection Act will give Monsanto the immunity to plant GM crops without having to worry about getting into trouble with Federal courts or even the government. This bill also will enable Monsanto to plant any GM crops under court review that were first illegally approved by both FDA and USDA.

Under the deceptive title of Farmer Assurance Provision, Monsanto will enjoy ultimate protection from the legal system while at the same time this bill will block non-GMO and organic farmers from having equal protection. Thatâs when Monsanto has been suing and abusing organic or non-GMO farmers by pushing them out of business. Monsanto has also been forcing farmers to pay Monsanto technology fee if the farmerâs organic or non-GMO crops were contaminated with GMOs (Surprisingly enough even it was because of cross-contamination).

Under this law Monsanto would be even more reckless to exploit the small farms and legal system and push for their domination of our seeds and food supply. Monsanto & giant biotech know that the sales of organic products have been skyrocketing in 2012, so their entire goal is to make it impossible for anyone else to survive in the market. Monsanto is also very well aware that GM foods that were illegally approved by both USDA and FDA, will eventually result in many lawsuits and they don't want to be the same as Tobacco industry who had to settle in courts and compensate people.

Despite millions against Monsanto Protection Act, the Senate, Congress and President passed this bill

When Monsanto wanted to pass this bill last year, many advocates and major organization including Union of Concerned scientists, American Civil Liberties Union (ACLU), the National Family Farm Coalition and Center for Food Safety all came together and acted quickly against this bill.

However, despite the major outcry in 2012, the Senate and Congress acted so quickly this year to pass the bill without even considering millions who were against this bill last year and signed the old petition. This happened just yesterday before anyone had any time to oppose it - it was passed with a blink of an eye in less than two days. However, more than 250,000 people signed the petition by Food and Democracy asking Obama to veto Monsantoâs Protection Act but the Presidant signed the bill yesterday.