Despite 250,000 people signing a petition requesting the President of the United States to veto Monsanto Protection Act, this bill was signed by the President into law. Under this law Monsanto will enjoy ultimate power and immunity from the US Federal courts and even the government.

This is all happening when the name of Monsanto by itself scares millions of people across the globe that have been poisoned or terrorized by this evil company. Thanks to Monsanto, now, America has become an experimental battle field for testing new GM technology and crops.

Many concerned scientists and independent scientific communities have expressed their concern with genetically modified organisms (27 countries outright banned its use) for its potential harms on people especially children, pregnant women, elderly and those with lower immune system. In many cases concerned scientists including Dr. Huber and Dr Arpad Pusztai who warned the public about GMOs, paid a high price of being threatened and even lost their jobs.

Passing Monsanto Protection Act into law will enable Monsanto to even more recklessly plant GM crops without having any liability, legally. That way Monsanto in the near future will have no worries of getting sued by millions who are poisoned everyday by its GM crops. 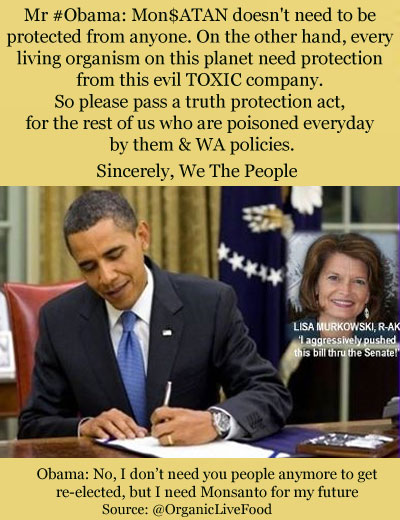 President Obama on the other hand, who promised the Americans to label GM foods(before he was elected into office), has done nothing to lead America towards a healthier and nutritional food system. Thatâs when a rich country like US with 16 trillion dollars GDP a year has one of the cheapest and most addictive food systems, compared to other industrial countries in the world.

The Senate, Congress and the President acted so quickly this year to pass Monsanto Protection Act that there was hardly any time left for people to come together and take a serious action. However, it is ironic that a country that canât agree and even pass its annual budget, passes a bill, in a blink of an eye, that will exempt one of the most toxic corporations in America from being held liable in case of a lawsuit.

On the other hand, Obama who promised food transparency in 2008 Presidential election, appointed individuals whoâve been working, defending and lobbying for the giant biotech as head of FDA and USDA. In fact, soon after Obama took office he appointed Roger Beachy, the former director at Monsanto as head of USDA, Tom Vilsack, creator of Governors' Biotechnology Partnership as the commissioner of USDA and Mike Taylor, the former Monsantoâs attorney and VP as the deputy commissioner of FDA.

During Obamaâs Presidency the biotech and chemical companies were able to spend $46 million against the will of 93% of Americans to defeat California Prop.37 that required GMO labeling. Amercian people are not allowed to have the basic freedom of knowing what is in their food. Yet, the mainstream media regards Obama as the leader of the free world when corporations like Monsanto and banksters lead the policies of this country based on corporate profit and not for the good of people. Maybe deep down inside the President of the United States knows that you canât really lead people, if you donât love them and you canât save people if you donât serve them.

The decision Obama made to exempt one of the most toxic corporations in America from the legal system, has left a deep scar in heart and minds of people who voted for him because he promised change by putting peopleâs need ahead of few corporate elites. However, his policies has proven to be business as usual and in some cases even more conservative like the military industrial complex, choosing ruthless Wall Street advisors, Obama drones and exposing the toughest sanctions on Iran even at the expense of banning medicine for sick children. Interesting enough, despite all the sanctions aimed to paralyze Iran's economy, Mr. Obamaâs policies seem pretty friendly when it comes to selling GMO wheat to Iran.

The conservatives have pushed the U.S. policies far to the right, and neo-conservatism and NeoCon mentality is now accepted as normal attitude in Washington. Even the Senate that is democrat and is supposed to be working for the people has sold its soul to the devil. Despite few senators like Barbara Boxer, Ron Paul, Ron Wyden and Ted Cruz who have been in forefront of the battle fighting against the tyranny and oppression of the federal system, others are nothing more than corporate puppets that are blindly obedient of their masters. Among many others, both Senators Barbara Mikulski and Roy Blunt helped Monsanto Protection Act to become a law, so quickly and so blindly without giving the public enough time to oppose it.

America feels it has lost its leader.....

Obama came to the office with slogan of change, yet he sold his soul into corporate tyranny the moments after he got elected.

For what matters, above race and gender, is the class that one serves. To many, Obamaâs very presence in the White House reaffirms the moral nation. He is a marketing dream. Like Calvin Klein or Beneton, he is a brand that promises something special â something exciting, almost risque, as if he might be a radical, as if he might enact change. He makes people feel good. Heâs post-modern man with no political baggage and all thatâs fake."

As Chris Hedges, the author of Empire of Illusion says âPresident Obama, does one thing and Brand Obama gets you to believe another. This is the essence of successful advertising."

However, now, In the hearts and minds of many Americans even democrats, Obama betrayed his people â especially the ones that voted for him, fought for him and put him into the office.

The war is now being waged and we all live in an era when information becomes misinformation, when science, math, chemistry and psychics become irrelevant and when the elected officials become so partisan that they canât even agree on FACTS such as hurricanes, global warming or disadvantaged poverty. The truth is that, despite what the society teaches us, compassion for the poor and unfortunate isnât weakness and vulture capitalism and selfishness isnât strength. As Oliver Stone said in his recent documentary called the untold history of the USA âA nation consumed by its technology soon becomes a society of tyranny hated by the ones that are tyrannizedâ.