48% of Americans drink 2.6 glasses of sodas on a daily basis. A 12-ounce soda has about 31.8 grams (equal to 10 teaspoons) of sugar. Sugary drinks like sodas and energy drinks are not good for health for many reasons.

In February 2011, Center for Science in the Public Interest (CSPI) petitioned FDA to ban the use of 4-methylimidazole, or 4-Mel which is formed as a byproduct of caramel coloring due to reaction between sugar, ammonia and ammonia sulfite. However, according to NPR the FDA issued a statement saying that consumers should drink more than 1,000 cans of soda a day to reach the doses that have been shown to lead to cancer in rodents. 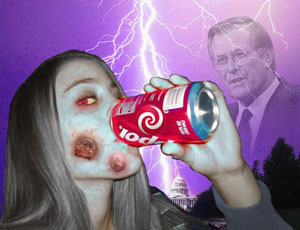 The National Toxicity Program found âclear evidenceâ of 4-Mel toxicity in sodas and linked 4-Mel to infertility, thyroid dysfunction and liver and lung cancer. After the report by National Toxicity Program about 4-Mel toxicity, the State of California added 4-Mel to the list of chemicals linked to cancer. Top 17 toxic foods, preservatives and additives that are causing cancer

For more than 16 years, Prop 65 consumer protection laws have challenged thousands of products that are a threat to consumersâ health. According to Prop 65 consumer protection laws, the state of California has successfully banned the use of the carcinogen and all coke products sold in California are required by law to have a cancer warning label. Â

Although Coca-Cola has recently decided to remove carcinogenic 4-MEI from their drinks, Pepsi still continues using high levels of 4-MEI in their drinks:

According to NPR, nine out of ten samples of Coke products purchased outside California had little or no trace of 4-Mel, whereas, 10 of 10 samples of Pepsi products purchased nationwide contained levels of 4-MEI that were about four to eight times higher than the safety levels set by California. The testing was conducted by Eurofins Analytical laboratory in Metairie, La.

Even if cancer-causing 4-Mel is removed from sodas, sodas still pose a big threat to your health

Most sodas and soft drinks including Coca-Cola, Sprite, PepsiCo, Dr. Pepper and Mountain Dew have common GMO ingredients like high fructose corn syrup in them. According to a report by Nutrition Research Center, here is what happens after drinking soda:

The first 10 minutes: within 10 minutes after drinking sodas, 10 teaspoons of sugar hit your system (100% more than the recommended daily sugar intake) and phosphoric acid cuts the overwhelming sweetness and thatâs the only reason that you wonât throw up.

Within 20 minutes: Your body will experience an insulin burst as your blood sugar spikes while your liver turn massive amount of sugar into fat.

Within 40 minutes: Your body has absorbed caffeine so your blood pressure goes up and your liver dumps more sugar into your bloodstream.

Within 45 minutes: your body releases more dopamine (dopamine stimulates the pleasure centers of the brain)âthe same reaction with drug addicts and their response to heroin.

After 60 minutes: Phosphoric acid binds magnesium, zinc and calcium in your lower intestine and high levels of artificial sweeteners (like aspartame) or sugar increases excretion of calcium via urine. The caffeine will also come to play by dehydrating your body and you will lose a lot of water by going to bathroom. Phosphoric acid and caffeine also deplete your body from the bonded magnesium, zinc and calcium as well as sodium, electrolyte and water that were headed to your bones. After losing the valuable nutrients in your body that could have been used for hydrating or building stronger bones and teeth, you get sugar rush and your system will crash.

If what you just read isnât enough to quit sodas, here are more reasons:

Letâs take a look at the lovely ingredients in sodas:

1. Sugar: The soda industry doesnât use organic cane sugar; they use the cheapest white processed bleached sugar in their drinks. White sugar increases insulin level , it can also cause high blood pressure, high cholesterol, heart disease, diabetes, obesity, premature aging and many other side effects.

Diet sodas are even worse than non-diet sodas, since they contain artificial sweeteners like aspartame made of methyl alcohol (wood alcohol), aspartic acid and phenylalanine. Aspartame has been linked to 92 different health problems and some of them are craving for sugar, emotional disorders, seizures, weight gain, obesity, cancer, diabetes, leukemia and more http://www.seattleorganicrestaurants.com/vegan-whole-food/aspartame-sweeteners-health-risks.php

2. Phosphoric Acid: Phosphoric acids affect the bodyâs ability to absorb calcium and can soften bones and teeth and cause osteoporosis.

4. High Fructose Corn syrup: High fructose corn syrup (HFCS) is made from Monsantoâs toxic producing GMO corn (90% of corn and soy in US are GMOs). HFCS is a result of farmersâ exploitation of farms subsidy back in 1980s when there was a shortage of corn. More than 3 decades later, millions of your tax dollars have gone to the pocket of giant Agribusinesses by becoming Twinkies and other processed or cheap foods toxic to your health. Beside the health risks of GMOs, toxic HFCS considered GRAS (Generally regarded As Safe) by FDA has been linked to obesity, high blood pressure, heart disease, cancer, diabetes and many other health problems. Â http://www.seattleorganicrestaurants.com/vegan-whole-foods/high-fructose-corn-syrup/

5. Addictive ingredients like Cocaine in Coke: The only US Corporation that has the right to import coca leaves to US is Coca-Cola. Coca-Cola imports coca leaves legally to US via a coca processing lab known as the Stepan Company. Stepan (http://en.wikipedia.org/wiki/Stepan_Company) Company imports 100 metric tons of coca every year to the United States under "special permission".

However while African Americans make up only for 13.6% of the US population, 40% of the total prison population is filled with blacks, most of them whom are jailed as a result of the current âWar On Drugâ. Itâs the same interesting concept with the President of the United States, who ships more weapons (to so called friendly nations) in a day than what an arm dealer does in a year!

Although the US government claims that 333,000 grams of cocaine is used for medical purposes in US, some have questioned that if most doctors, pharmacists and member are Congress are addicted to drugs like cocaine themselves? However, we know that up to this day, Coca-Cola has been using small traces of cocaine in their drinks. No wonder why many people are hooked on these drinks like heroin and have a hard time quitting these drinks.

6. Tap water: Some people believe that when they drink sodas, they are drinking water since 86% of a soft drink is tap water. What they donât know is that caffeine in soft drinks is diuretic and depletes the body from water and essential nutrients. Tap water has also toxins and heavy metals such as lead, trihalomethanes, cadmium, fluoride and MTBE (http://www.seattleorganicrestaurants.com/vegan-whole-foods/drinking-water-mtbe/): http://seattleorganicrestaurants.com/vegan-whole-foods/fluoride-health-risks/

7. Aborted fetuses used as a flavor enhancer in many sodas:

The HEK 293 is the code for aborted human kidney cells used to generate taste receptors that can stimulate a type of protein known as G protein familiar to humanâs taste in sodas. According to sources Senomyx and PepsiCo have been using aborted human fetal cells as a flavor enhances in their drinks. Aborted human fetal cells are also used in makeup products and vaccines. Â http://www.seattleorganicrestaurants.com/vegan-whole-food/aborted-fetus-cells-artificial-flavors.php

I donât know if these are enough reasons for people to stop drinking sodas and boycott the products of giant Agribusinesses that have been bringing death and misery all these years to the US population. Instead of sodas you can hydrate your body with organic watermelon or coconut water. Coconut water was used in WW2 to heal wounded soldiers with its electrolytes and anti-inflammatory qualities. http://www.seattleorganicrestaurants.com/vegan-whole-foods/coconut-coconut-oil/