Monsanto among many other powerful corporations in America is known for its hypocritical business model and its glorious past from helping to build the first atomic bomb and poisoning more than 5 million Vietnamese with Agent Orange which resulted in 400,000 deaths and disabilities to its monopoly and total market control over the worldâs foods and seeds.

Recently, Monsanto among many other powerful corporations including the big banks and the giant oil companies has joined the so-called World Business Council for Sustainable Development (WBCSD) pursuing the United Nations' so called âAgenda 21â. The so called âAgenda 21â is an Environmental Program on sustainable development that shows concern about the sudden catastrophic changes in the climate and the environment. Beside the increase in use of pesticides and chemicals that have lead to changes in the environment, the Agenda 21 pushes for a more globalized and centralized government. 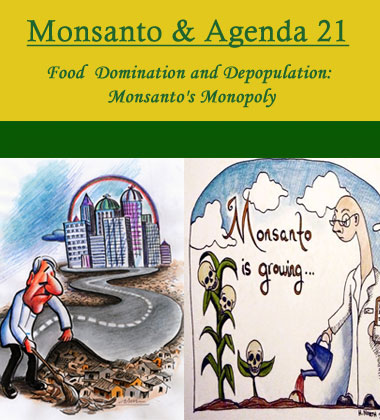 The critics of Agenda 21 however have further expressed their concern that âGlobal Sustainabilityâ is only a label for centralizing power in the UN and making the richest 1% even richer at the expense of individual freedom, private property right and social and national sovereignty of nations.

But whatâs amazing is Monsanto, big banks and the giant oil companies joining Agenda 21 for âGlobal sustainabilityâ. Â Itâs ironic how just a label or a name could affect the hearts and minds of the people. For example there used to be wealth tax in early 20th century on the richest 1%. Since they had most of weath they had to pay taxes to maintain services. Then since the second world war, the tax burden was shifted towards the middle class and the working class. They used 'labels' to change and create this shift of contributions from the super rich to the working class.

For instance, the "inheritance tax" was again and again supported by many people, in both of the major parties in U.S. Then the Republican party and the lobbists for the billionaires came up with a plan and that was to change the name from "inheritance tax" to "death tax", and over night 88% of Americans were suddenly against this tax since they thought this would include them whereas before, inheritance normally applied only to very wealthy people. Apart from the name alone "death tax", nothing else - nothing else - in the provisions of the tax law changed. Only the name - or the "label" of this tax. That is all that was needed to change the mind of majority of Americans.

When they wanted to start the Iraqi war in 2003, again, it was labelled as, "the Iraqi Freedom", and when they wanted to pass the law to reduce the rights of Americans and subject them to intrusive wiretaping, they called it, "the Patriot Act", since only a non-patriot would be against this, apparently.

So labels are everything. The name is the most important. The content, the code, the underlying intentions and the desire to manipulate and control the masses, is irrelevant, and they can pass it by people without Americans having a time to review and reject it.

So an inquisitive mind will wonder how the axis of evil âMonsantoâ can join the global big business alliance (Big businesses, NGOs and shareholders of giant companies who control 43% of the nationsâ wealth) for pushing the âglobal sustainabilityâ agenda for the greater good of the planet.

However, the WBCSD coalition who obviously doesnât think the same is celebrating that Monsanto is joining the global business alliance. In fact WBCSD in a press release earlier this week points out how âMonsantoâ the leading global provider of biotechnology and modern agriculture can improve the productivity and food quality of the world.

Yes, tell that to 250,000 Indian farmers who have committed suicide in the last 10 years by drinking Monsantoâs insecticide or one out of 5 kids who are living in poverty in America and one out of three kids who are suffering from obesity and type II diabetes, all thanks to corporations like Monsanto who are appreciated for their big business sense and achievement even at the expense of contaminating organic crops with GMOs and fighting the will of 93% of Americans to put a label on GMO foods.

So in this world of globalized exploitation and monopoly the UN is no exception for exploiting the environmental problems for the purpose of strengthening its power and position to enslave the nations by pushing the agenda of one world government with new world orders.

I donât care much for labels since I know the pro-GMO and pro-globalization crowd would label this article a conspiracy theory. To them even disadvantaged poverty or climate change are just conspiracies. However, I do care about actions, since actions speak stronger than words. Both labels of the Agenda 21 which are âsustainabilityâ and âdevelopmentâ are very well aligned with the bright history of Monsanto, big banks and the giant oil companies. Instead of focusing on the main problems which are increase in chemicals, pesticides and environmental pollutions, the entire focus is short term solutions even if it meant exploiting the problem at the first place. By the end of the day Rahm Emanuel, the man who put Obama into the office once said âcrisis is an opportunityâ, yes indeed âcrisis is truly an opportunity for the rich and powerful to screw over the middle class and the working people so they get richer and more belligerentâ.

"United Nations exists in order to avoid having a REAL and CREDIBLE international organization that would serve humanity, justice, and equality on earth"

United Nations was created after the second world war by Britain, France, and U.S. in order to set a new world order â something similar to the order of pack of dogs in the wild, with U.S. as the top dog, followed by other nuclear wielding 5 members of security council. Together now they have established a world order based on favoritism and self-interest agenda that in essence achieves one thing: âTo avoid having a real and credible international organization for justice and equality for every citizen and every nation on earthâ.

These few nuclear wielding nations do not want justice and equality for every nation since their entire agenda is to create inequality which would make these 5 nations able to retain their power over others, control economic markets, and lead the pack of dogs in the world. Any nation that does not want to belong to the pack of dogs or the pack mentality is demonized, criticized, marginalized, and will be sanctioned or attacked for some bogus reason or another.

United Nations exists in order to avoid having a REAL and CREDIBLE international organization that would serve humanity, justice, and equality on earth.

That is why I have always believed that U.N. is nothing but USED TOILET PAPER.