Political corruption of Monsanto and its influence

Monsanto, one of the most hated companies in America is known for its history of corruption, producing some of the most toxic chemicals and pesticides in our food supply, food monopoly and total market control.Â 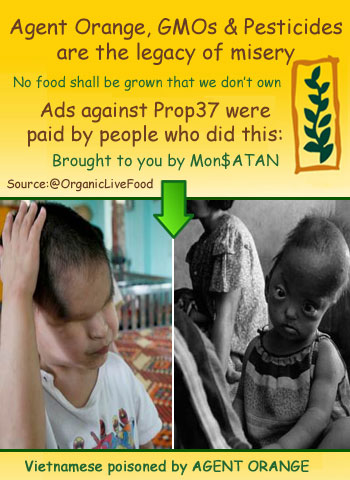 More and more Americans are becoming aware how companies like Monsanto are polluting our air, water and food. Over the last few years, many people have been against the use of GMOs, pesticides or rBGH growth hormones, however the deep pockets of biotech keeps paying for US Congress and politicians.

France was one of the first countries that put a ban on the import of GMOs, synthetic pesticides and livestock treated with hormones and antibiotics.

But as we all know, no act of rebellion against the pesticide empire remains unpunished. During George Bushâs presidency, the French rejected to import livestock from US, and US retaliated by increasing steel import tariffâs during GATT talks to punish the French government and accused them of being anti-American.

George Bushâs famous quote that "either you are with us or you are with the enemyâ is still remembered by many. In fact, Donald Rumsfeld (CEO of pharmaceutical company Searle that was later sold to Monsanto) called European countries (France and Germany) that did not support the invasion of Iraq in 2003, the âold Europeâ.

As George Orwell says âuntil people become conscious, they never rebel and until after they have rebelled, they cannot become consciousâ. The criminal elite know that if they take away the meaning of words, it will incapacitate our thoughts.Â So labels are everything; the content, the code, the underlying intentions and the desire to manipulate and control the masses so they can pass anything to American public with no time to review or reject it.

Keep in mind that recently, Monsanto, oil companies and big banks are pushing for the UNâs so called Agenda 21 (that supposedly stands for global sustainability and development).

Letâs take a look at Monsantoâs dark history and how this company has deeply been embedded with our government since 1990:

Here is the history:

The history of Monsanto and FDA starts in 1991 when Margaret Miller (one of the ex-top scientists of Monsanto) was appointed as Deputy Director of FDA by George Bush Sr. Margaret Miller, as one of the top scientists in Monsanto was working on developing rBGH growth hormones that have been linked to breast cancer on women and prostate cancer in men. Soon after she was appointed as head of FDA, Miller approved rBGH growth hormones that she was previously studying while working for Monsanto.

During the same year in 1991, Clarence Thomas, an extremist and a right wing nutcase (who was Monsantoâs former attorney and a big promoter of agribusinesses and mass chemical poisoning) was appointed to the Supreme Court despite the rage of the whole nation.

Almost a decade later, Al Gore who warned all of us of the rapid climate change and toxic producing corporations like Monsanto won the 2000 election by the majority vote. However, over 46,000 black votes were discounted in the state of Florida where George Bushâs bother was the governor. It was the decision of the US Supreme Court that effectively resolved the 2000 presidential election fraud in favor of George W. Bush. Clarence Thomas was the one who casted the deceptive vote and put George W. Bush back into the office.

In 1992, Michael Taylor, Monsantoâs former attorney was appointed as Deputy Commissioner of FDA. A position that gave him the authority to expedite the approval of genetically modified organisms in our food supply.Â  Later on Mike Taylor became the VP of Monsanto.

In 1993, Rufus Yerxa (Monsantoâs Chief Counsel and one of the most powerful figures in the world international trade policies) was nominated as U.S. deputy to the World Trade Organization.

In 1996, Michael Kantor (who was on Monsantoâs Board of Directors) became the US Secretary of Commerce.

In 2000, Carol Tucker Foreman who was a lobbyist for Monsanto was appointed as the âConsumer Advocateâ on the international committee assessing genetically modified foods.

In 2001, Anne Veneman (who was on Board of Directors of one of Monsantoâs biotech subsidiary called Calgene) was appointed as head of USDA in charge of regulating genetically modified organisms.

In January 2001, Donald Rumsfeld (the CEO of Searle pharmaceutical corporation owned by Monsanto) was appointed as the Secretary of Defense. Bush was a lame-duck president after his election but soon after 9/11 he rediscovered his mission (that was supposedly appointed to him by God) to fight the good war on terror. Secretary Rumsfeld was in charge of the Defense Department during 9/11 attack and the war on terror.

In 2001, Linda Fisher who previously was Monsantoâs VP of Government Affairs was appointed as Deputy Administrator of Environmental Protection Agency.

In 2002, George Poste (the former Monsantoâs animal specialist) was appointed as head of bioterrorism division of Homeland Security.

In 2008, Obama despite his promises to label GMO foods appointed Michael Taylor, (Monsantoâs former attorney and VP) as Deputy Commissioner of FDA. He also gave his blessing to soda companies to continue the use of aborted babies as flavor enhancer in sodas and soft drinks.

Not that Obama hasnât made any efforts to lead America towards a healthier food production (with temporary halt on GMO foods), he has continued the policies of George W Bush.

Obama also appointed Roger Beachy, (the former director at Monsanto) as head of USDA and appointed Tom Vilsack (the creator of Governors' Biotechnology Partnership) as the commissioner of USDA.

He promised to label GM foods but instead the USDA under the Obama administration approved the second generation of GMOs, GMO alfalfa and sugar beets that can increase the chances of cross contamination and many other environmental problems.