After I did some research I found out that the first article about GM babies was published in UK Daily Mail in 2001. The article states that 30 healthy GM babies were born after a series of experiments by Institute for Reproductive Medicine and Science of Saint Barnabas in New Jersey. The babies belonged to women who had fertility problems. So in order to fertilize her egg, extra genes from a female donor was inserted into her eggs. The genetic finger print on two of the one year olds shows that their DNA is inherited from two female and one male. This technology also allows GM babies to pass their genetic change into their off springs.

The research was conducted by embryologist Professor Jacques Cohen and his colleagues who promised a new technique that helps couples who canât have kids become fertile. Dr Jacques Cohen in the Journal Human Reproduction mentions how this is the first time that the human germline genetic modification has resulted in normal kids. 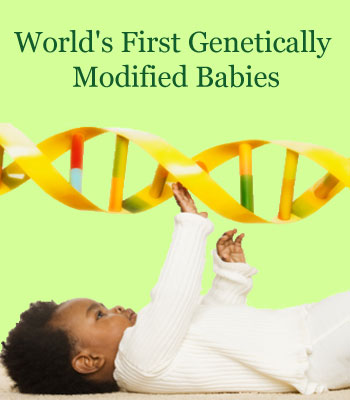 However, Genetic modification can result in unexpected mutations and many other problems

Since most of our foods are genetically modified, we can now see the vast health and environmental problems related with GMO foods including the increase in superweed and superbugs, loss of useful microorganisms in soil, mystery organism related to infertility, autism, premature aging, gastrointestinal problems, organ failure, increase in allergies and cancer.

Now, few years later after the first GM babies are born, we can find reports that question the success of genetic modification method for treating infertility. Many of these reports express concerns about dangers and long term health risks associated with this technology.

Even a report by USDA seems to have looked at the ethics of ooplasmic transplantation and how this method can increase the chances of chromosomal anomalies. In fact, this report shows how an 18-month old child born from this technology was diagnosed with autism. The report by USDA also states how there are no long term tests or follow-up studies regarding GM kids. So lack of long term tests and further research has resulted in doubt and hesitation about the safety and effectiveness of GM technology. Many independant researchers will agree that this is the same with GMO foods. The GMOs were unleashed into our food supply without proper testing and long term studies while both FDA and USDA showed no hesitation in approving GMOs.

Whatâs next, cloning human beings or owning their genes?

Crazy enough, since the biotech companies have secured patents on everything, they could also claim that the GM human beings are part of their patentable property. As crazy as it sounds, they are already in the process of making decisions on whether or not they can patent GM life.

Patenting in Biotechnology - An Overview

You might be surprised to know that many farmers have been sued by Monsanto simply because their non-GMO crops have been contaminated with GM crops (mostly because of cross-contamination). These farmers had to pay Monsanto hefty technology fee, even if they didnât know that their crops were cross-contaminated. So, one would wonder whatâs going to stop biotech companies like Monsanto from claiming that they own the patent rights on a human life or even cloning human beings in the future? History has proven that the giant biotech have been able to own our lands, seeds and food supply, so what's going to stop them from owning human DNA?