Few days ago there was a protest organized by Food and Democracy in front of the White House. The protestors gathered together demanding the President of the United States to veto Monsantoâs Protection Act.

More than 250,000 people also signed a petition by Food and Democracy asking Obama not to pass the bill. Despite, many signing the petition, Obama signed Monsantoâs protection Act into law few days ago. Thatâs when the President and his entire family eat only organic food. In fact, the first lady Michelle Obama who has been an advocate about nutrition and childhood obesity insisted,during Obama's presidential campaign in 2008, that their family has been on organic diet for the past few years. Yet President Obama has made no efforts to lead America towards healthier food production with temporary halt to GMO foods while conducting a comprehensive research study of its long term side effects. 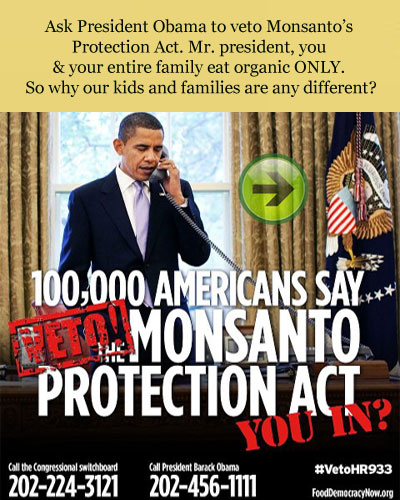 However, the word âCHOICEâ is quite laughable coming from Monsanto among the big â6 pesticide firmsâ who spent $46 million to defeat Proposition No.37 and were able to pass Monsantoâs Protection Act despite a major outcry from the American public in 2012 and 2013. Â

The Food and Democracy and famers from all over the country were rallying in front of the White House asking the President to give an executive order to label GM foods. An expert from Food and Democracy said in an interview that âThe so-called âbiotech riderâ was included in budget legislation that won final approval from the House, avoiding a shutdown of the federal government on March 27, when the current funding was set to expire. The provision was slipped into the legislation anonymously and explicitly grants the U.S. Department of Agriculture the authority to override a judicial ruling stopping the planting of a genetically modified crop.

If leadership in Washington, D.C. can betray the public behind closed doors, itâs time that the American public to gain the right to transparency about what they are eating and feeding their families every day.â

Recently President Obama during his meeting with Palestinian leader mentioned that people should push their leaders towards better and more constructive policies. If Mr. President believes in what he says, itâs time to respect the will of 250,000 people that asked him to veto Monsantoâs Protection Act. It's also time to respect the will of 93% of all Americans that agree GMOs must be labeled.