You probably remember the Seralini study last summer on rats that were fed GMO corn. The horrifying tumors on rats after they were fed GMO created even more concern among the average consumers and scientific community about the health risks associated with GMOs. November last year California Porp37 who was in forefront of battle to label GMOs lost the battle by only 3% margin to giant biotech corporations like DuPont and Monsanto. 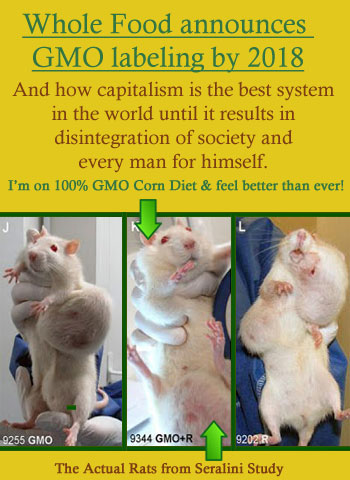 The giant biotech and chemical companies spent $46 to defeat Prop37 and keep GMOs hidden in our food supply. They were able to convince the majority that putting a label on your food will increase your grocery bill. In the middle of all of this, last summer Whole Foods employees were caught on camera of not being fully truthful about Whole Foods carrying products that are genetically modified.

Whole Foods started to lose its popularity and its ground among the pro GMO labeling supporters even more when it didnât donate one single dollar to Prop.37. However, after being publicly criticized and exposed, Whole Foods executives contributed $25,000 to Prop.37.

I agree that most of the criticism about Whole Foods & Trader Joes for carrying hidden GMO brands is valid. Having said that, one would wonder if companies like Whole Foods and Trader Joes are able to carry ONLY organic and non-GMO brands since most of our seeds and our food supply is controlled and made by giant biotech and chemical companies? Â

Up to 75% of processed foods in grocery stores in America are genetically modified and only 3% of Americaâs farm lands are used to grow fruits and vegetables. The government is no help in any way, shape or form. With a national GDP of 15 trillion dollars a year and instead of spending your tax dollars on subsidizing broccoli and blueberries, billion of your tax dollars are being spent on subsidizing high fructose corn syrup and the cheapest and most addictive products. Thanks to our politician's concern for our well being, or not, subsidizing obesity has turned our society into one of the most obese and least healthy nations in the world. Â

Last year despite the Seralini study, the documentary by Jeffrey M. Smith called âGenetic Rouletteâ and the outrage of many other scientists like Dr Huber and health activists, the mainstream media completely ignored and brushed the issues related with genetically modified organisms.

But instead the mainsteam media focus was on war in Iraq and Afghanistan and how our soldiers in Middle East are fighting for our âfreedomâ. However, the idea of freedom sounds unrealistic when giant corporations like DuPont and Monsanto can defeat the will of 93% of all Americans by spending millions of dollars against GMO labeling. If you read the history of Monsanto or DuPont, you could clearly see how these giant corporations are deeply embedded within our government. Somehow, itâs almost impossible to know where they end and where our government starts.

However the independent media like @OrganicLiveFood, InfoWars, Organic Consumers Association, NaturalNews, Occupy Monsanto, and many other institute and health organizations that cannot be bought and sold that easily with money - sent a message loud and clear that they wonât tolerate hidden GMOs in our food supply.

Somehow between November 2012 and March 2013, the executives in Whole Foods made the decision to require GMO labeling. In a press release Whole Foods announced that by 2018 all the products in Whole Foods of US and Canada must be labeled on whether or not they are genetically modified.

But in a society that capitalism rules, all the decisions of CEOs and executives are based on profit and not doing the right or moral thing and Whole Foods is not any different.Â

Whole Food executives soon realized that what distinguishes their store from the rest is the fact that their consumers are into health and nutrition and care about what they eat.

They also became aware that the organic food industry has been growing about 10% every year consistently in the last 5 years with sales for 2012 estimated to reach $35 billion, while non-organic food has grown less than 1.5% per year for the same period.

So Whole Foods like any other corporation in a capitalistic society, made a decision based on profit taking. But although it is obvious that most certainly the decision of Whole Foods to label all their products by 2018 is for pure capitalistic reasons, no one can deny that this is a huge victory for food activists, and consumers. Of course, this is also intended to improve their public relations.

And, no doubt, we will see press releases by Whole Foods that labeling GMOs is an important aspect of their business. But how can any corporation in America make a moral or right decision when profiteering is always a priority. These big corporations have to make more profit every quarter and not even for one quarter, can they stop and just explain to their shareholders that this quarter their market share increase was same as last quarter.Â

Socialize the loss and capitalize the gain and the beauty of the deal is that no one is responsible anymore because everyone is drinking from the same Kool-aid.

By the end of the day as Gordon Gecko told all of us "... greed is good but now it seems it's legal". Even if Whole Foods decision is purely based on economic survival, the question is, why Whole Foods would be any different than any other powerful corporation in America? 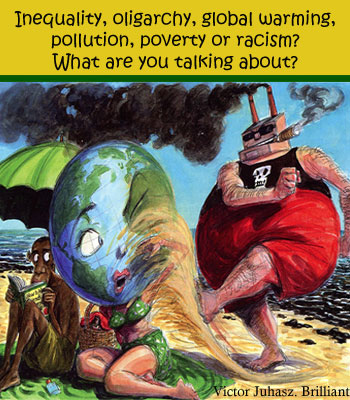 The entire system is designed and run based on competition and profiteering so companies like Halliburton and General Electric (GE) can make billions of dollars from war and have the power to hire 900 full time accountants to get away with paying NO TAXES.

In fact, truth be told, it was Ronald Reagan who said that everybody should pay taxes â¦ even a waitress (on her tips) who is making $5 an hour. That was a heartless fabrication to shift the tax burden from the wealthiest 1% to the Middle class and working families and thatâs how weâve ended up living in a society where the richest 1% has more wealth than the bottom 90%.

Extreme competition and pure capitalism have made majority of people cynical and self-serving that no one can agree on anything anymore whether itâs annual federal budget, racism, climate change, GMO harms or poverty.

What happened to those days that we used to wage wars on poverty not poor people? One out of four Americans are now living in poverty but we've become so partisan that we donât even believe in disadvantaged poverty anymore. We all remember Michele Bachmann famous quote that "If one doesn't work, they shouldn't eat". Ironically she calls herself Christian while Jesus said feed the poor and hungry and treat others the way you want to be treated. I wonder what Jesus say if he was alive today!

In 2012 presidential election when Mitt Romney was asked about poverty he said that he is not worried about the poor, but I wonder who he is worried about then? Because during the financial crisis the middle class were the ones who lost their jobs, their homes, their pension and their retirement, not the Wall Street or banksters including Chase or JP Morgan. They got bailed out with your tax dollars and with that money big banks bought smaller banks, so now "THEY ARE TOO BIG TO FAIL". That is what all men with power want "Even MORE POWER".

Capitalism also focuses on commercial wealth whether or not it results in production quality.The man who makes a table or grows a crop makes the success of the crop or the table a test of excellence.The intermediary who buys and sells the crop or the table is not concerned with the goodness of table or crop, but with the profit he makes between their purchase and sale. In a productive society the superiority of the things produced is the measure of success: in a Commercial society the amount of wealth accumulated by the dealer is the measure of success.